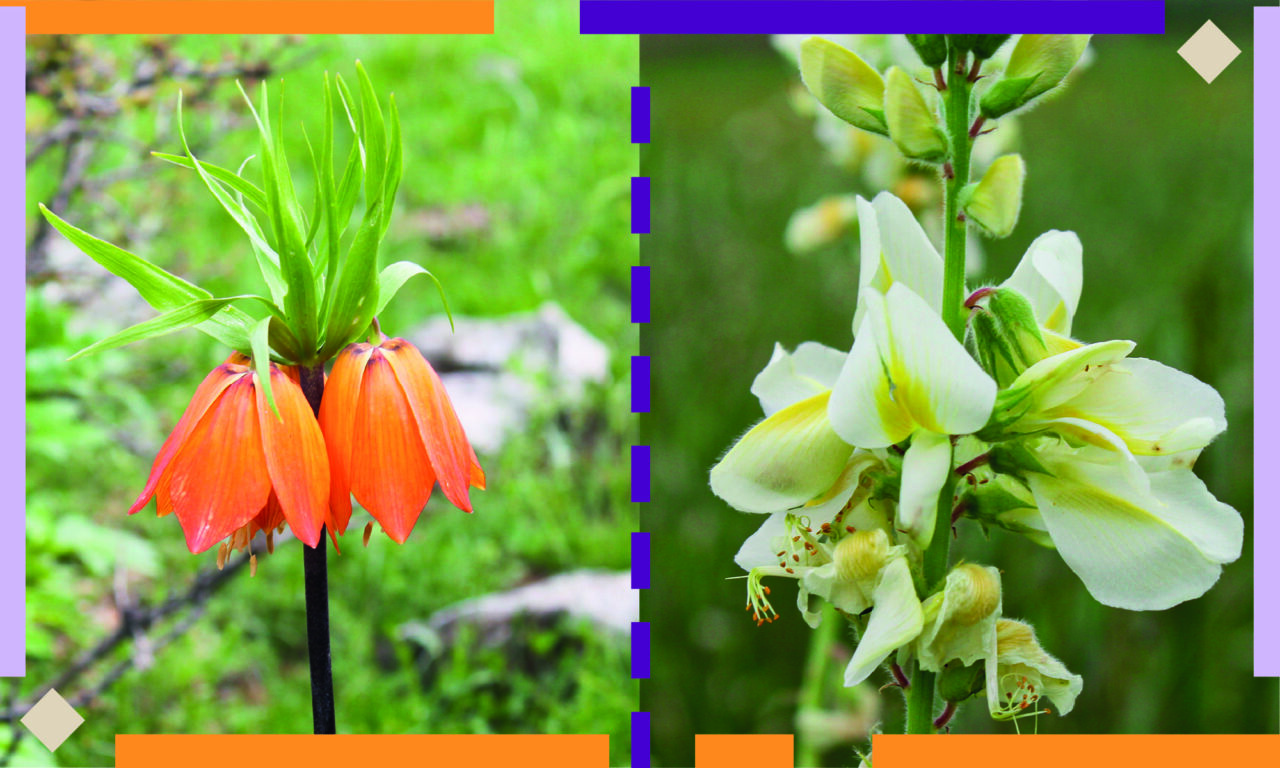 Diyarbakır and its environs possess a lush flora of more than 1500 plants and vegetation parallel in diversity to its geographical landscape. (Photograph: Mehmet Masum Süer)

Since for many years it has been deprived of the interest of botanists, information regarding the flora of Diyarbakır and especially the Tigris Valley was restricted to that under the main heading of Turkey. Yet this region has a plant diversity of more than 1500 species. Besides, 80 of these are rare plants that grow either only in Diyarbakır, or in a few other sites across the world at most.

The region’s flora diversity, endemic plants and threats this richness faces were examined by A. Selçuk Ertekin.

The Anatolian peninsula, thanks to its geographical location, geomorphological structure, climate types, and the various habitats and different vegetation types that are their outcome, possesses a rich flora. Around 11 thousand plant species grow in Turkey, and 3500 of them are endemic.

With its broad steppes and agricultural areas, the Southern Anatolia region displays a homogeneous outlook, and thus has not attracted much attention from botanists. This lack of research means that records of plant diversity in the region are restricted to the data of the Flora of Turkey.

Yet, the Southeastern Anatolia Region, which is placed under the Mesopotamia subheading of the Irano-Turanian floristic region, hosts many rare and endemic plant species. The region is also an important genetic centre where the wild relatives of many cultivated plants that are raised in various regions of the world grow, including the plants of peanut, wheat, barley, chickpea, lentil and pea.

19 Key Biodiversity Areas (KBA) have been delineated in the region, where, in terms of their habitat or biological diversity, nationally- or internationally-threatened species live. 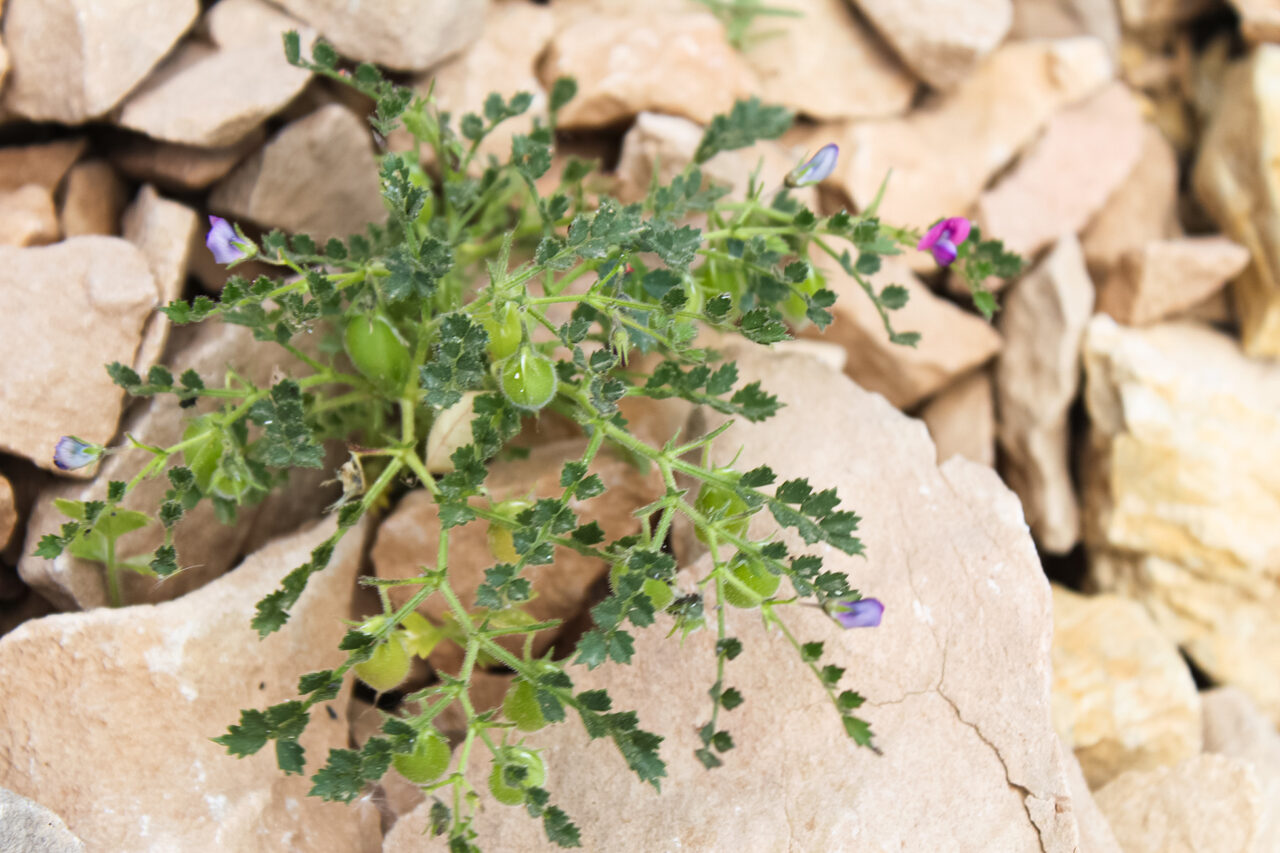 Another important aspect of the region is that it is the habitat of many wild relatives of a number of cultivated plants such as wheat, barley, chickpea and lentil. The photograph shows Siğilli Nohut, or the wild chickpea (Cicer reticulatum). (Photograph: A. Selçuk Ertekin) 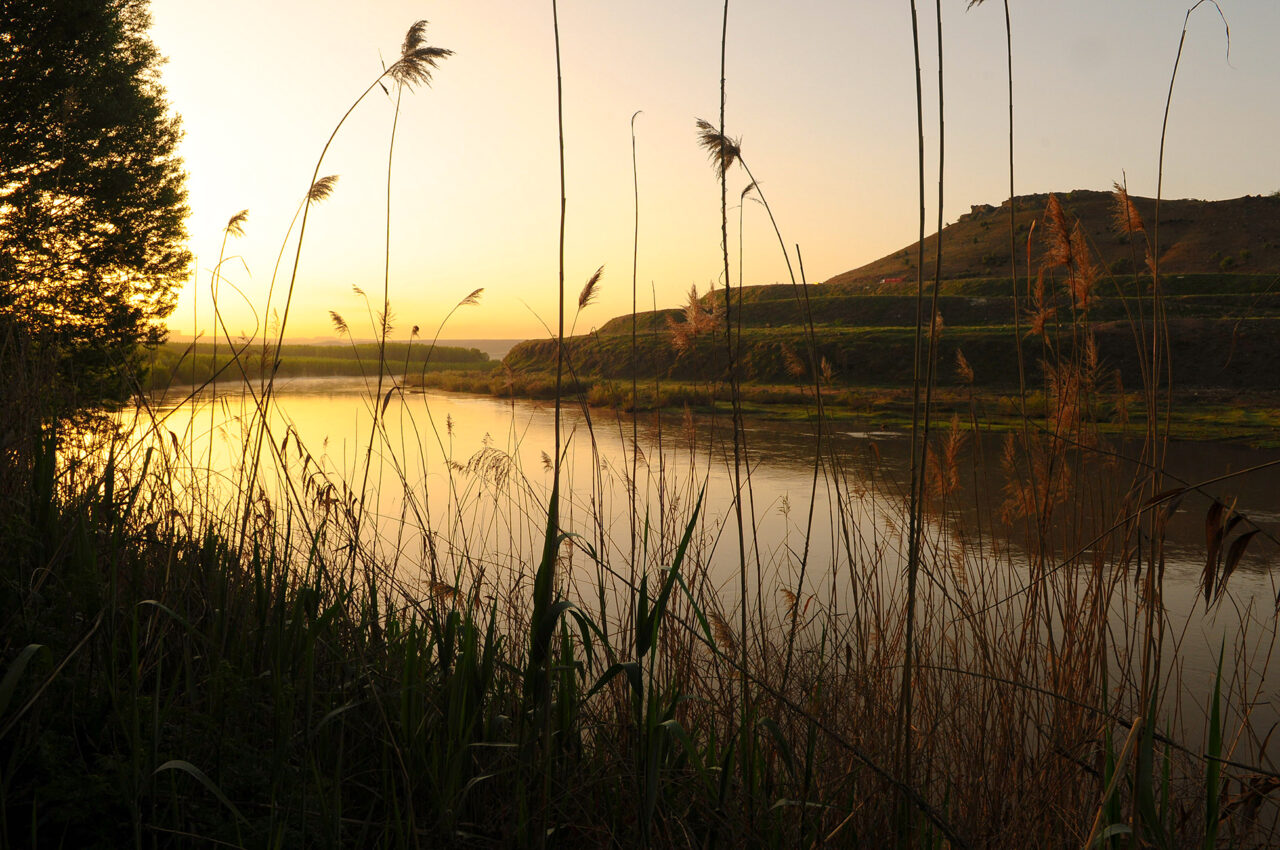 Surrounded by hills and mountains, the central areas of Diyarbakır form a hollow basin. Also referred to as the Diyarbakır Basin, the axis of this area is the wide Tigris Valley that extends along a west-to-east direction.

The Tigris Valley, extending along the course of the Tigris riverbed, comprises the rich ecosystems of the river and its environs, which begin at the Bismil Plain key biodiversity area and end at the Devegeçidi Dam key biodiversity area. These KBAs are home to many species on the Red List of Threatened Species prepared on the world scale according to the criteria of the International Union for Conservation of Nature (IUCN).

Diyarbakır and its environs possess a lush flora of approximately 1500 plants. Especially the mountainous regions surrounding the province, changing geographical and climatic factors, its vegetation structure and habitat diversity mean that the area is home to unique wild life. Around 80 of the plants that grow here are endemic to Diyarbakır. Some of them grow either only in Diyarbakır, or in a few other sites across the world at most.

Many plant species that grow in Diyarbakır and its environs have special importance, either because they are threatened, rare or endemic. Kabamayasıl, a type of bugle (Ajuga xylorrhiza), Dicle Koruğu (Rosularia blepharophylla) and the Silvan sainfoin (Onobrychis silvanensis) are narrow endemic plant species that are known to grow only in Diyarbakır.

Dicle Koruğu, with its white racemose flowers and rosette leaves, and Kabamayasıl, with its fan shaped dark green leaves, are rare plants that flower in rocky areas. As for Silvan Korungası, which comes into flower in steppes, it is a unique sainfoin with large, round pods and white, large flowers. 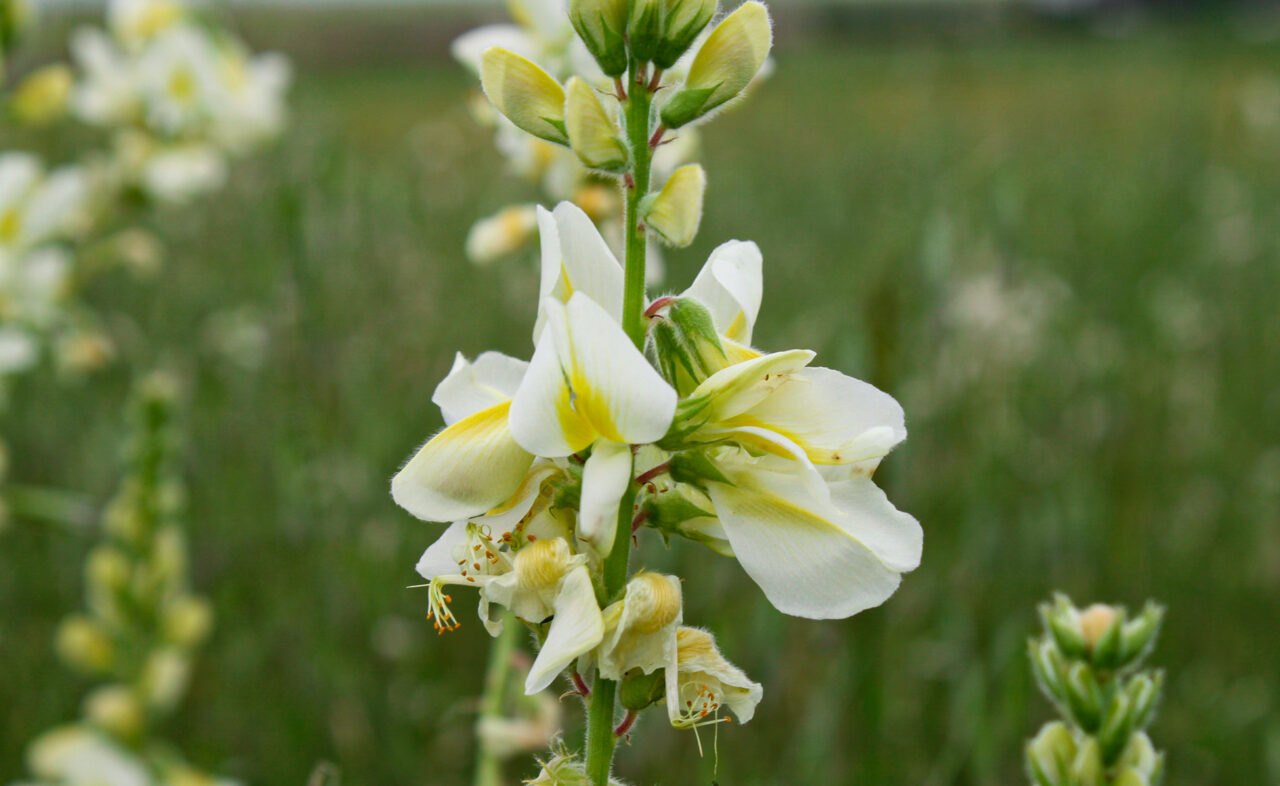 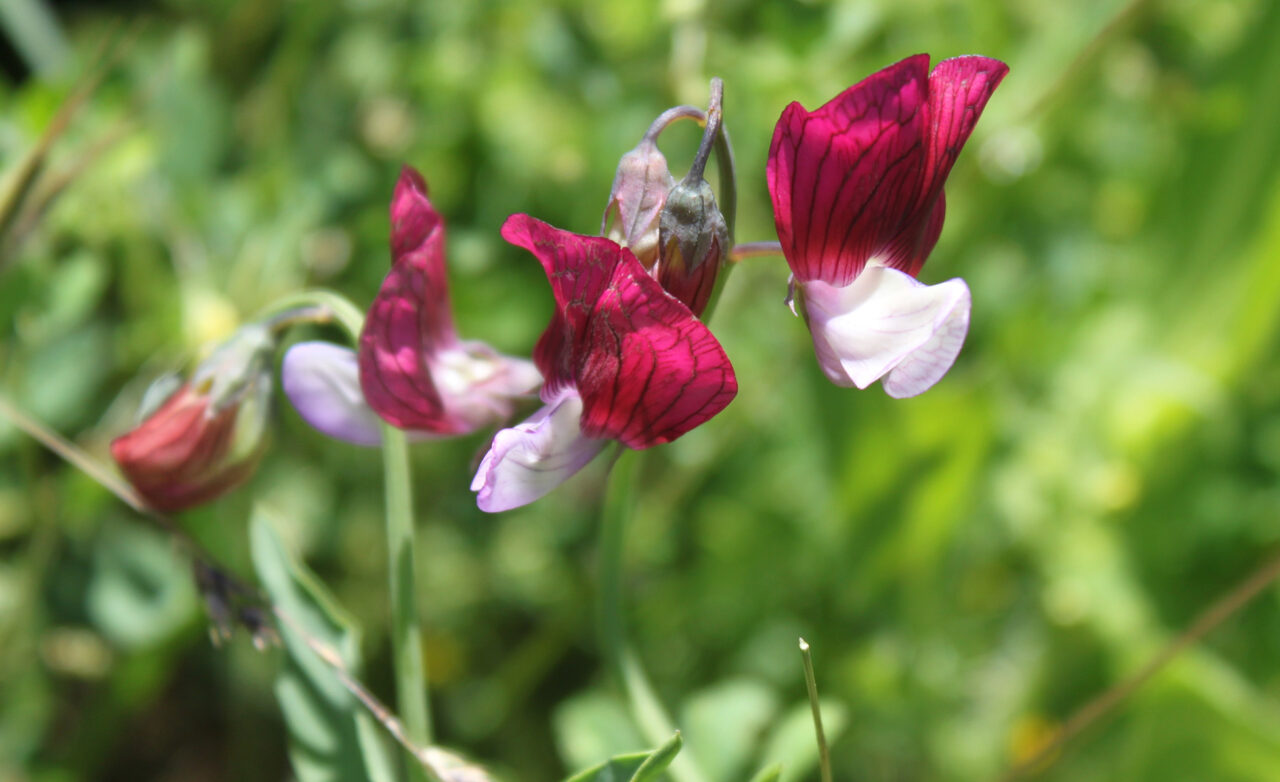 Urfa Koruğu (Rosularia haussknechtii), adaçayı, a type of sage, (Salvia balssiana), Çivit Otu (Isatis constricta and Isatis demiriziana), Düğün Çiçeği [lit. wedding flower], a type of buttercup, (Ranunculus bingoeldaghensis) are endemic plants that are observed only at a few other sites outside Diyarbakır.

Ova Fiği (Vicia esdraelonica) is an endemic type of vetch which only grows in Israel and the environs of Diyarbakır, and is globally endangered. Süslü Geven [lit. ornate milkvetch], a type of vetch, (Astragalus erythroaenius) is a rare species that only grows in Syria and the foothills of Karacadağ.

Bulbous plants including crown imperials, tulips, hyacinths and irises flower into a visual feast in spring months. Irises (Iris aucheri) ripple on the stony meadows of Karacadağ like an endless sea of many-coloured flowers.

In mountainous steppers, tulips (Tulipa sintenisii and Tulipa aleppensis), along with milkvetches, form an inseparable part of nature’s colours. As for the crown imperial, known locally as Ağlayan Gelin [lit. crying bride] (Fritillaria imperialis), it appears at the foot of every rock with its goblet-shaped, orange flowers. 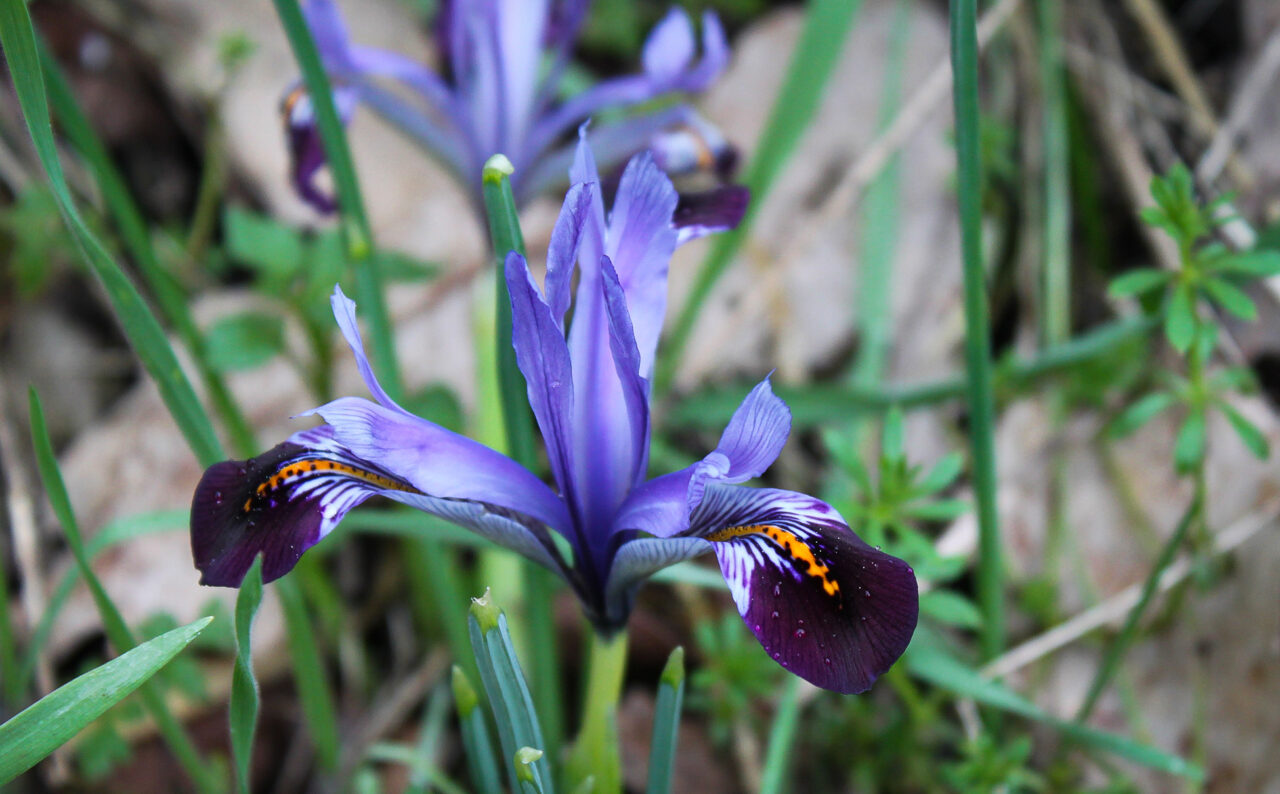 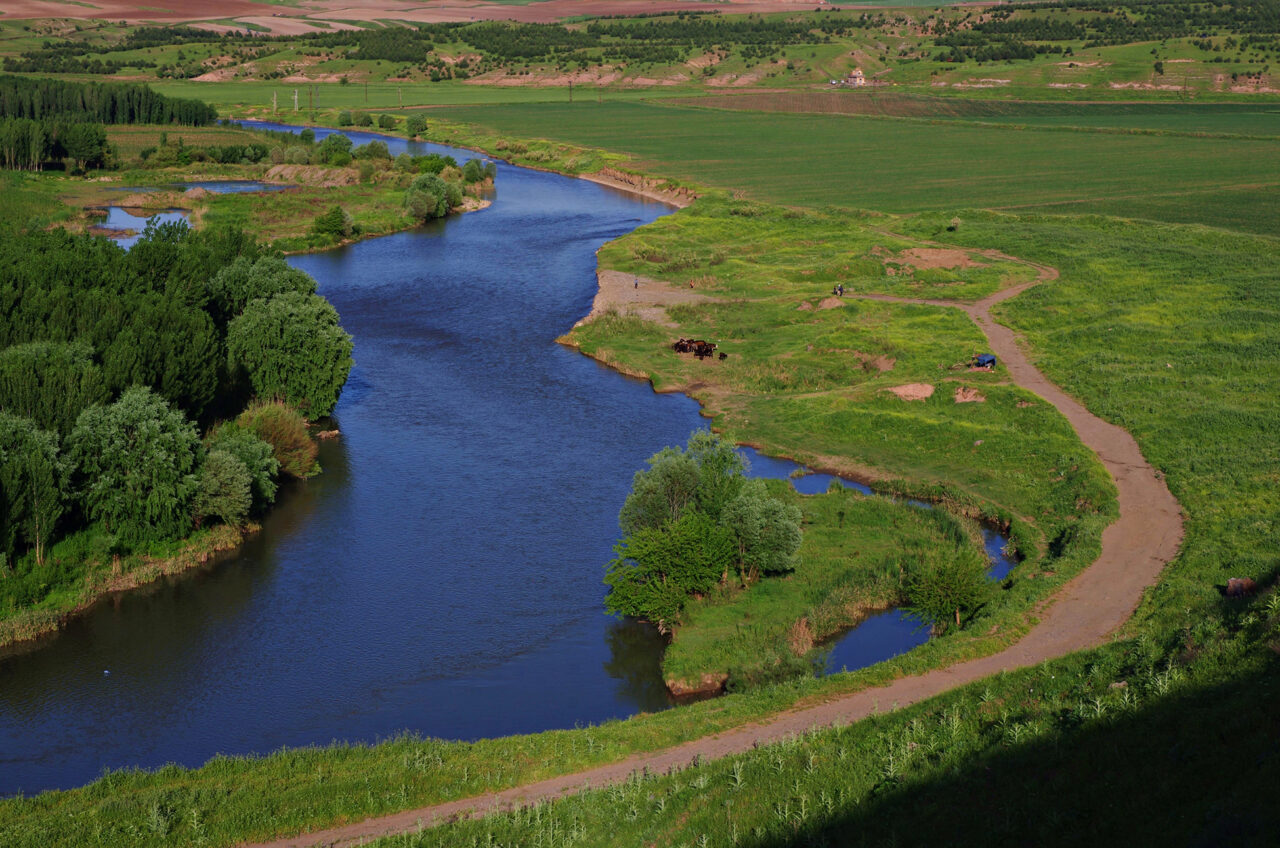 Along the Tigris River and its branches, one can see forest areas with different types of willow and poplar trees, and dense shrubbery made up of plants such as blackberry, liquorice, reed and tamarisk. (Photograph: Mehmet Masum Süer)

The Tigris Valley is located to the east of Diyarbakır city centre and with its broad sand dunes on the shores of the Tigris River, incorporates habitats that display diversity in a relatively confined area.

Although the main branch of the river has suffered widespread destruction, the smaller streams that form its branches resemble a gallery forest formed of dense trees. In addition to the dominant tree species such as various types of willow trees and the Euphrates Poplar, there are also vines, and at lower areas, bushes and herbaceous plants.

Right beside these gallery forests, we come across dense shrubbery and reed-beds formed of plants including blackberry, liquorice, reed, tamarisk and the like. Rich habitats that also include marshes, meadows and steppes are home to many different species.

Rare and Endemic Plants of the Tigris Valley – I

Keklikgözü [lit. partridge’s eye] (Adonis dentata)
The only yellow-flowered adonis species that grows in Turkey, it is known from only one record in the province of Şanlıurfa. A small population of this rare species grows in the Tigris Valley, and according to the Red Data Book of Turkish Plants, it is in the vulnerable [VU] category.

Goriz (Alkanna trichophila subsp. mardinensis)
This species is native to the Southeastern Anatolia Region, and appears widely in the Tigris Valley. This plant is in the Low Risk [LR (lc)] category according to the Red Data Book of Turkish Plants.

Bodur Bapuçça (Cota wiedemanniana)
A species of chamomile native to Turkey with wide dispersion. The plant also grows in the Tigris Valley and is in the Low Risk [LR (lc)] category according to the Red Data Book of Turkish Plants.

Tezdüğme (Centaurea consanguinea)
A species of knapweed native to Turkey with wide dispersion. The plant also grows in the Tigris Valley and is in the Low Risk [LR (lc)] category according to the Red Data Book of Turkish Plants. 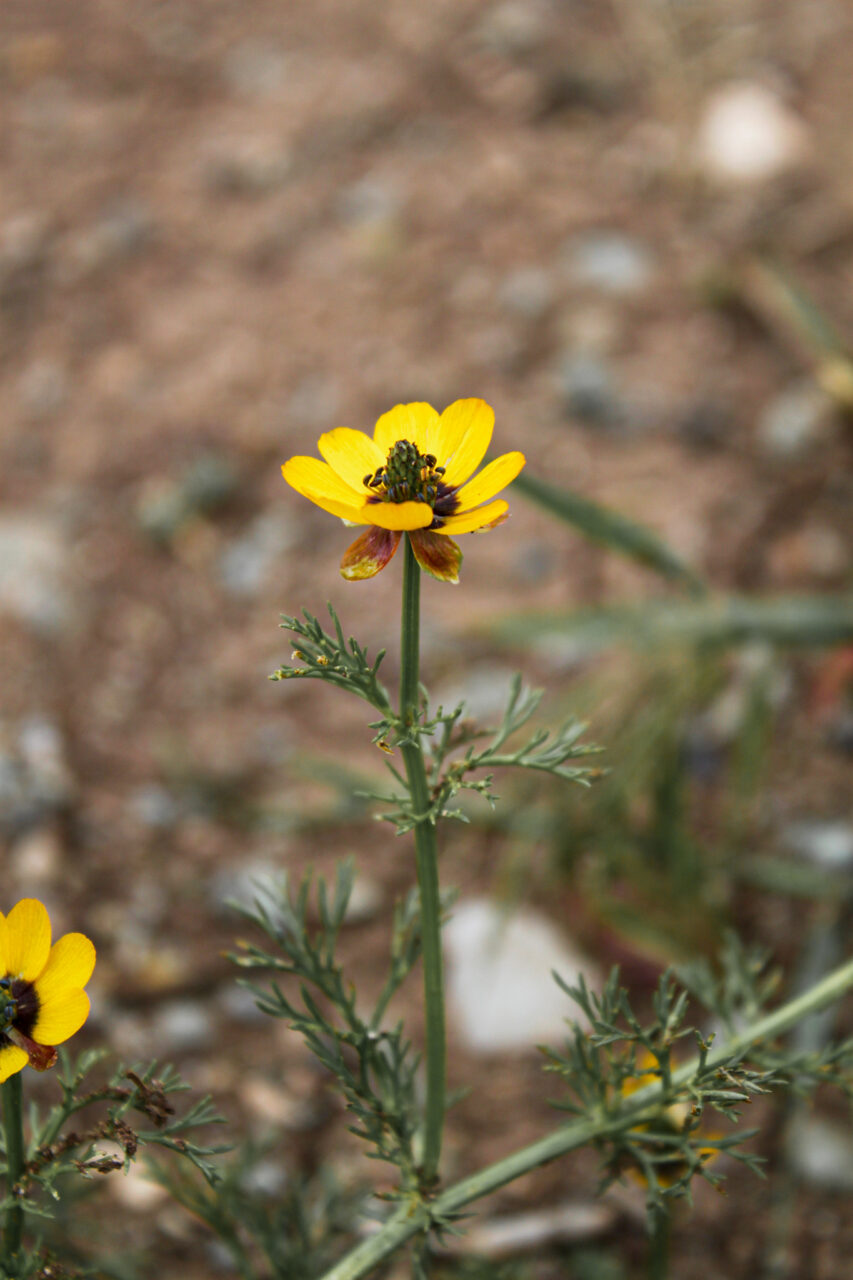 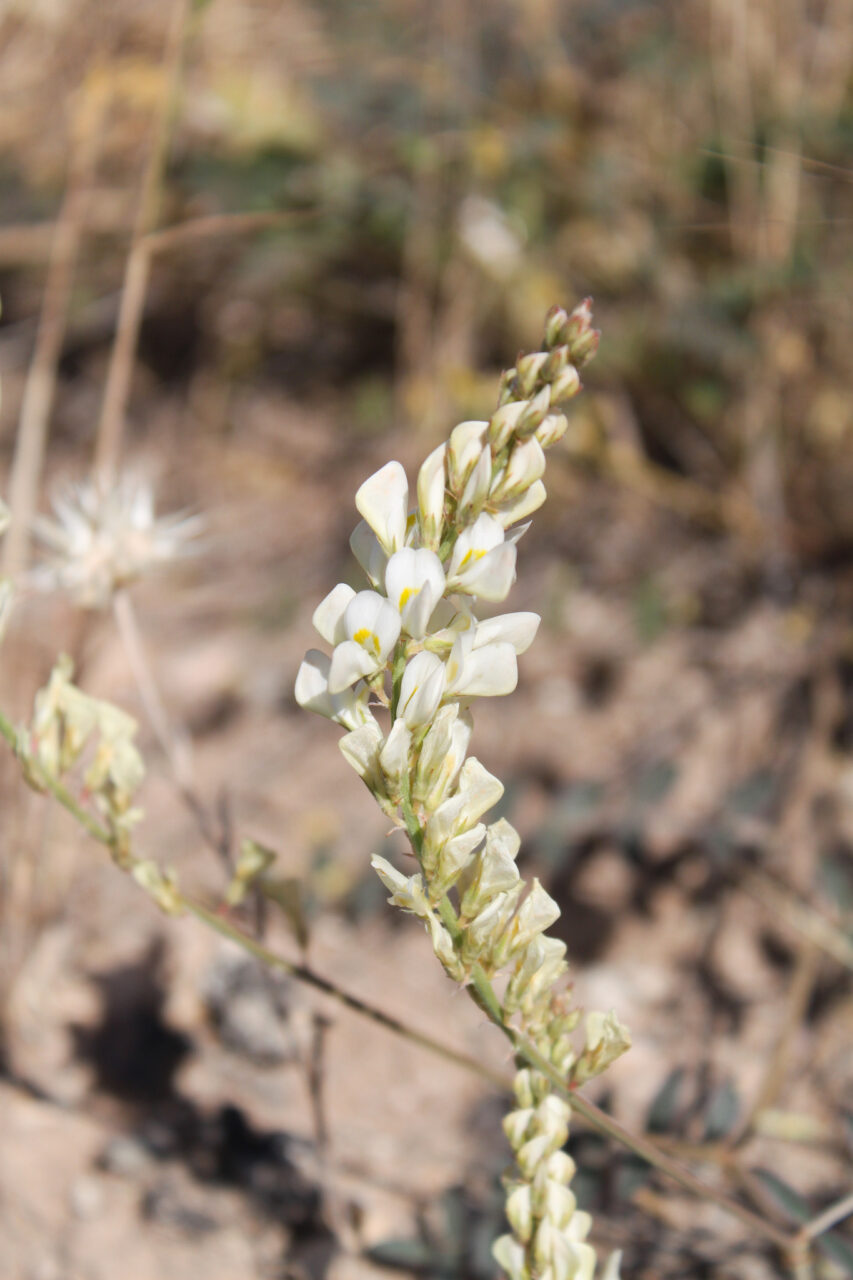 Rare and Endemic Plants of the Tigris Valley – II

Kirpi Nohutu [lit. Hedgehog Chickpea] (Cicer echinospermum)
Native to the Southeastern Anatolia Region, this is a highly common chickpea species that prefers the steppes around Diyarbakır. The plant also grows in the Tigris Valley and is in the Vulnerable [VU] category according to the Red Data Book of Turkish Plants.

Uzuza (Colchicum balansae)
Native to the Mediterranean and Southeastern Anatolian region, Uzuza is a crocus that flowers in autumn. The Tigris Valley forms the eastern border of the plant’s range. Represented by a small population in the area, this species is in the Low Risk [LR (lc)] category according to the Red Data Book of Turkish Plants.

Boz Sarmaşık (Convolvulus galaticus)
A field bindweed native to Turkey with a wide range. This plant is seen across broad expanses of the Tigris Valley, and mainly prefers field sides and steppes. This species is in the Low Risk [LR (lc)] category according to the Red Data Book of Turkish Plants.

Sarı Batalak [lit. yellow camel calf] (Hedysarum kotschyi)
It is known that this rare plant, with two listings in the Flora of Turkey so far, grows in the provinces of Kahramanmaraş and Diyarbakır. In the Diyarbakır area, it has only been recorded in the Tigris Valley. According to the Red Data Book of Turkish Plants, it is in the Vulnerable [VU] category.

Rare and Endemic Plants of the Tigris Valley – III

Tekedikeni (Lycium anatolicum)
A bush-like species approximately 1-2 metres tall that prefers waterside habitats, it is native to Turkey and grows widely. It has only been recorded in the Tigris Valley in the Diyarbakır area. This species is in the Low Risk [LR (lc)] category according to the Red Data Book of Turkish Plants.

Antep Trefoil (Trifolium aintabense)
An endemic trefoil species observed in the Mediterranean and Southeastern Anatolian regions. The plant grows widely in the area, and is in the Low Risk [LR (lc)] category according to the Red Data Book of Turkish Plants.

Akboyotu (Trigonella kotschyi)
This endemic specis is observed in the Mediterranean Region, and it has been recorded once in the Tigris Valley. Its current status in the area is unknown. It is in the Low Risk [LR (lc)] category according to the Red Data Book of Turkish Plants.

Ova Fiği (Vicia esdraelonica)
This rare species that grows in Palestine and Turkey was identified in Şanlıurfa around 130 years ago according to Flora of Turkey data, however its existence today in this province remains unconfirmed. Two listings exist from Diyarbakır, however, there is no data regarding the presence of the species in the Tigris Valley today. This plant prefers humid habitats close to waterfronts, and according to the Red Data Book of Turkish Plants, it is in the Vulnerable [VU] category. 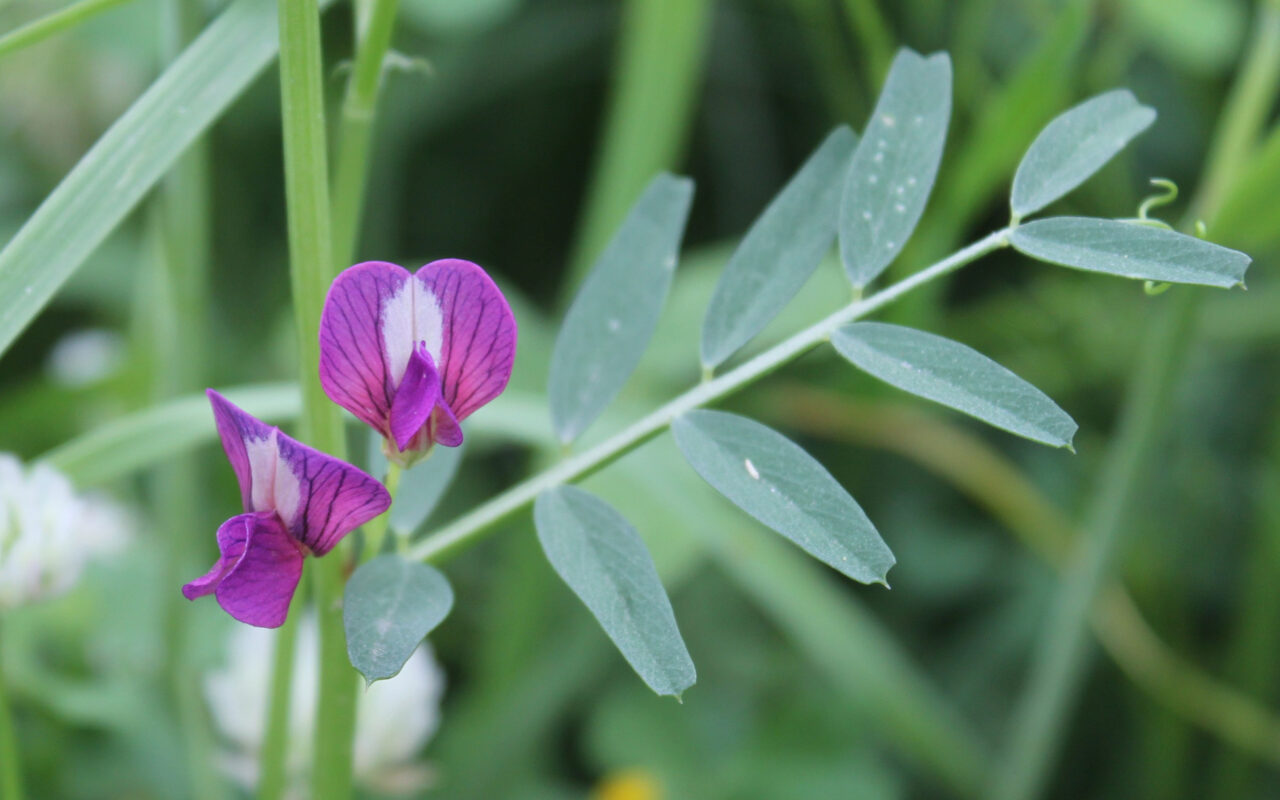 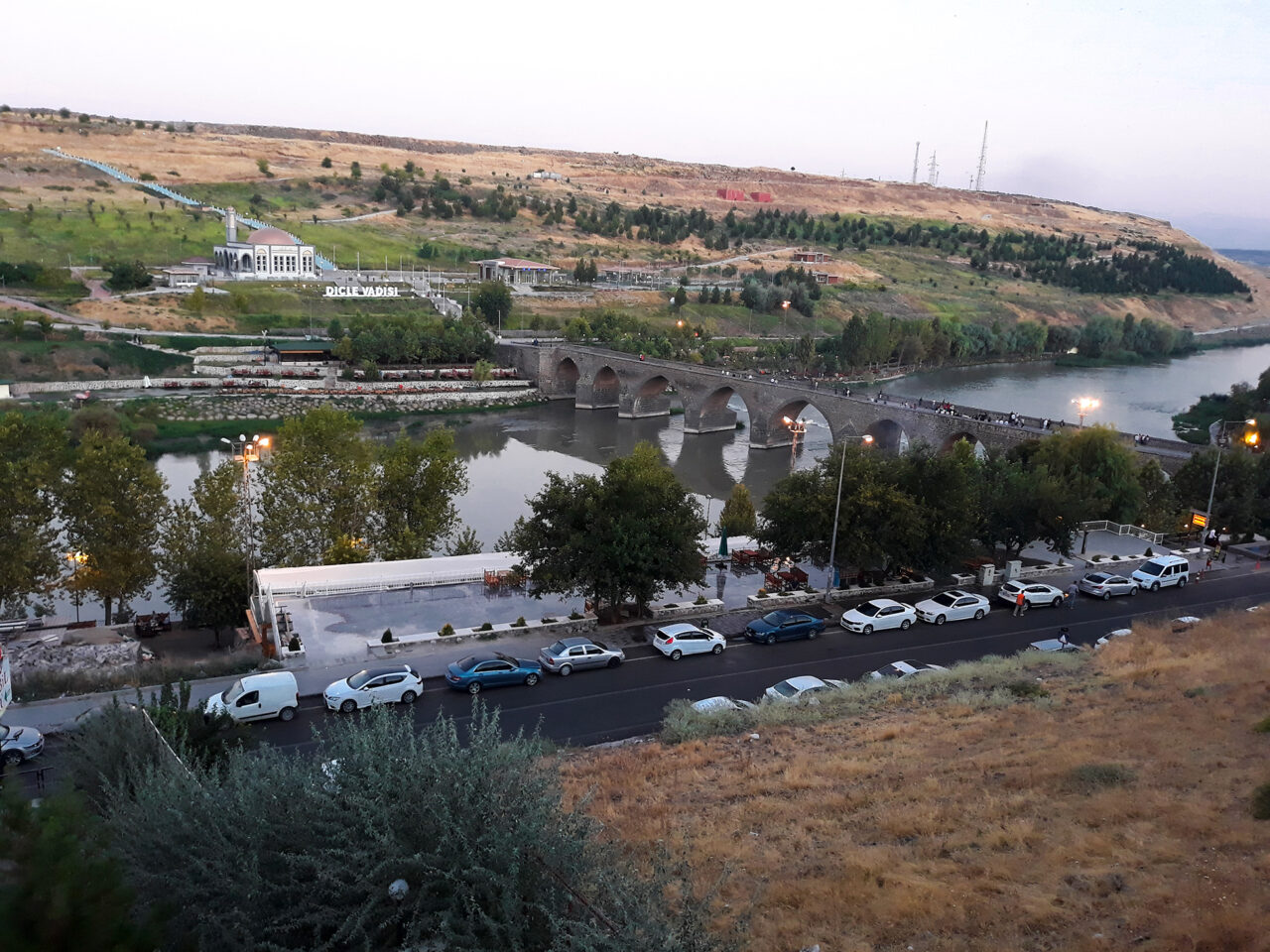 The people-oriented growth of cities that does not revolve around nature is also a great problem for Diyarbakır. Construction development on the shore of the Tigris River disrupts the entire ecological balance in the valley, including plant and animal diversity. (Photograph: Nevin Soyukaya, 2019)

Interferences to the ecosystem cause direct or indirect damage on all of its components. Certain human activities that continue to be carried out in the Tigris Valley have a direct impact on plants and animals and all types of habitats.

The expansion of urban settlement areas, the transformation of riverside areas in order to build restaurants or create picnic areas and changes made to natural structure that focus solely on human needs come first among such threats and no doubt also negatively impact plant diversity.

Logging of natural vegetation along the branches of the Tigris River also creates great direct harm to the ecosystem. Since such areas are home to many different living beings and are closely interconnected with the existence of other habitats, the scope of the damage grows further.

When the ecosystem is perceived as a whole, not only logging but also any attempt to adapt plants that do not exist in the system, for instance pine trees, causes great problems in terms of biodiversity. On the other hand, the burning of reed-beds and shrubbery in the area to transform the land for agricultural production, leads to the loss of the habitat along with all the living beings of the area.

We must also mention that especially in recent years, the transformation of steppes into agricultural areas, and the use of pesticides in these new zones have disrupted the habitats of many natural and endemic plant species and endangered their survival.