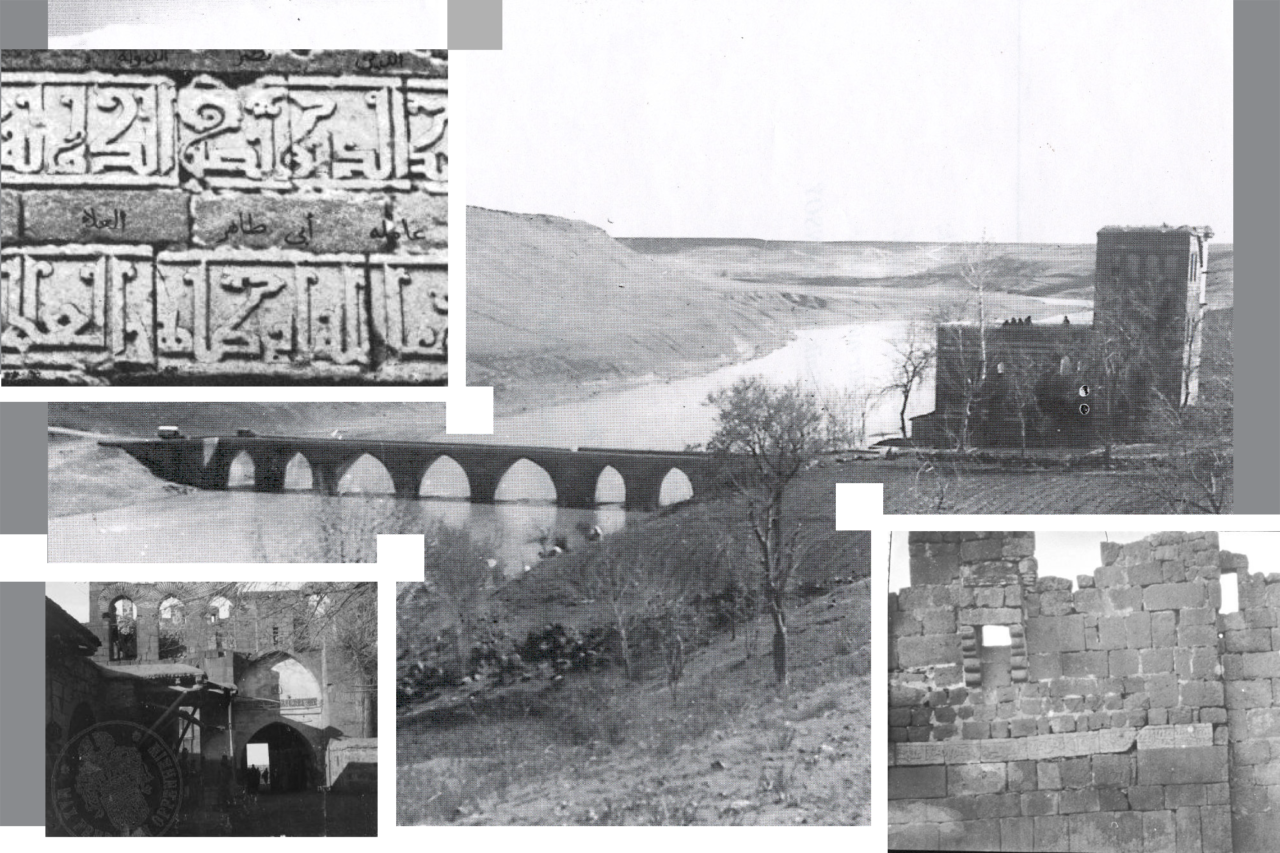 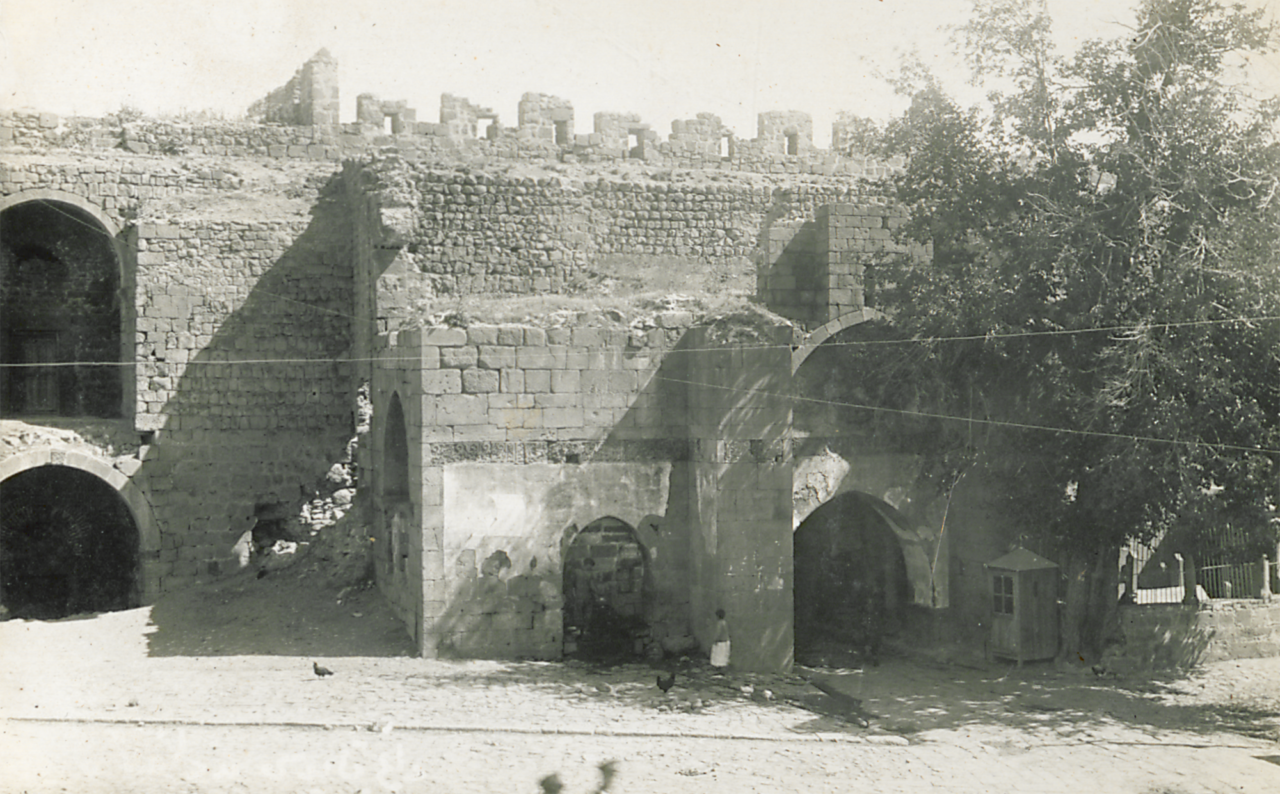 The Mountain (Dağ) Gate Marwanid Masjid (Mosque) in the early years of the Republic.

The Marwanids, a Kurdish dynasty to have governed in al-Jazira (Upper Mesopotamia) from 983 to 1085, merit special and separate mention in Diyarbakır’s history. The near-century-long rule of the Marwanids in this area is, in many ways, a unique parenthesis that may be deemed ahead of its time for the entire Mesopotamian region.

Historians highlight the Marwanids’ preference of a non-conflictual, pluralistic political rhetoric, enabling the coexistence of different ethnic and religious groups, within and outside their domain. This has resulted in the period being remembered as one of peace and harmony in many sources. Along with the prosperity brought by the enhancement of trade relations, these years also witnessed the achievement of various gains on the social level fuelled by advancements in science and the arts. These were reflected in a great number of fields ranging from the period’s miniature painting to its architectural structures. In fact, due to all of these factors, the Marwanid Emirate even found itself on the receiving end of incoming migration from its surrounding areas.

The first important figure that merits mention in Marwanid history is Harbohti Hussain ibn Dustak (983-990) of the Bohtan Kurds, famed by the name of ‘Badh’. Yet the one to become the dynasty’s namesake was Marwan from the Kormas (İncekaya) Village in Sert’s (Siirt) Shirvan region. Marwan was brother-in-law to Badh. When Badh began raiding surrounding settlements in order to establish political control, Marwan’s sons joined their uncle’s army and played an active role. Once Badh extended his authority all the way to Mosul, an important Mesopotamian city, he had coins issued here in his name in order to provide legitimacy to his rule.

When Badh was slain on the battlefield in 990, he was replaced by the eldest son of Marwan ibn Kak, al-Hasan ibn Marwan (990-997), who is known as the actual founder of the Marwanid Dynasty. In addition to extending his reach, al-Hasan also undertook ventures to improve and cultivate his domain. One such venture was restorations at Amid’s Mountain (Dağ) Gate entrance in 996, which took an entire year to complete.

Inscription of the restoration at the Mountain (Dağ) gate undertaken by al-Hasan ibn Marwan in 996.

Coin issued by Mumahhid al-Dawla in their capital Mayyafariqin in 999.

When al-Hasan ibn Marwan was assassinated in Amid in 997, he was succeeded by his brother Mumahhid al-Dawla Sa’id (997-1011) who was governor of Jezireh (Cizre) at the time. Upon taking the throne, Mumahhid al-Dawla immediately embarked on public improvements to the capital Mayyafariqin (Silvan). He had the walls inspected and mended for starters, and throughout his reign took a close interest in matters of the domain’s reconstruction and development.

The Mountain (Dağ) Gate in the early years of the Republic.

Mumahhid al-Dawla’s death was by assassination, just like his brother. Following his murder in Hettah (Entax/Lice), his other brother Nasr al-Dawla Ahmed took his place. The period of Nasr al-Dawla’s rule from 1011 to 1061 became the Marwanids’ golden era in all senses. Like his elder brother Mumahhid al-Dawla before him, Nasr al-Dawla too set upon restoring structures and constructing new ones first in the capital Mayyafariqin and then in other important cities. In addition to the sovereign’s palace and residences for dynasty members, he had gardens, water closets, channels, mosques, watch towers, inns, bath houses (hamam), hospitals (bimaristan) and bridges built for public use in Mayyafariqin. He founded the town of Nasriyya, later to be known as al-Maden, on the banks of the Batman River. He had multiple towers on the Amid city walls either restored or reconstructed. In March 1056, he had a masjid built at the Mountain (Dağ) Gate entrance for the use of soldiers patrolling the walls.

View of the Mountain Gate and the Marwanid Mosque in the early years of the Republic.

Tower reconstructed into the inner walls of the Citadel by Nasr al-Dawla’s son Muhammed in 1053.

Photograph of the now lost inscription above the Goat Tower (Keçi Burcu) showing that it had been repaired under Nasr al-Dawla’s son Muhammed.

In addition to placing importance on bettering the living conditions of his people, Nasr al-Dawla was also a ruler who cared for animals. A great many domestic and wild animals had reportedly been decimated in the winter of 1058 due to a mysterious bout of red snow. Some of those that survived approached human settlements out of starvation and would be killed by their inhabitants. This is not to say there weren’t also people who fed these animals throughout winter out of compassion and released them back into the wild with the coming of spring. Receiving news of these happenings, Nasr al-Dawla ordered granaries to be opened up immediately and wheat, barley and maize to be strewn across fields and mountains for birds, as well as plenty of fodder and hay be put out in nature for wild animals. This attention to animals on the part of Nasr al-Dawla did not remain limited to that winter alone, but lasted his entire life.  What lies behind Assyrian scholar Ibn Bakhtishu’s (d. 1059) dedication of his comprehensive zoological treatise “Kitab taba’i’ al- hayawtan wa-khawassiha- wa-manatfi’ a’da’ih” (“Book of the Characteristics of Animals and Their Properties and the Usefulness of Their Organs” – also called “Benefits of Animals” or “On the Usefulness of Animals” for short) to Nasr al-Dawla is precisely this evident love of animals.

In the British Museum copy of Ibn Bakhtishu’s “Benefits of Animals”, there is a miniature (1) depicting scholar Ibn Bakhtishu with Marwanid ruler Nasr al-Dawla. In his treatise, Ibn Baktishu portrayed animals such as the lion (2), elephant (3), peacock (4), chicken (5), mountain goat (6), fish and turtle (7). The 6th and 7th miniatures are from the copy in Paris.

The rule of Nasr al-Dawla is remembered in Marwanid history as a time of peace and order in many different ways. Baghdadi Christian physician Ibn Butlan, who arrived in the capital Mayyafariqin in 1059, considers this harmonious period from a health perspective in his manuscript for Nasr al-Dawla titled “Da’wat al-Atibba” (“Call to Physicians”). Here, Ibn Butlan writes that under Nasr al-Dawla’s rule plague outbreaks were less frequent and the populace was much healthier – so much so that he even complains of physicians going out of business with people no longer falling ill. 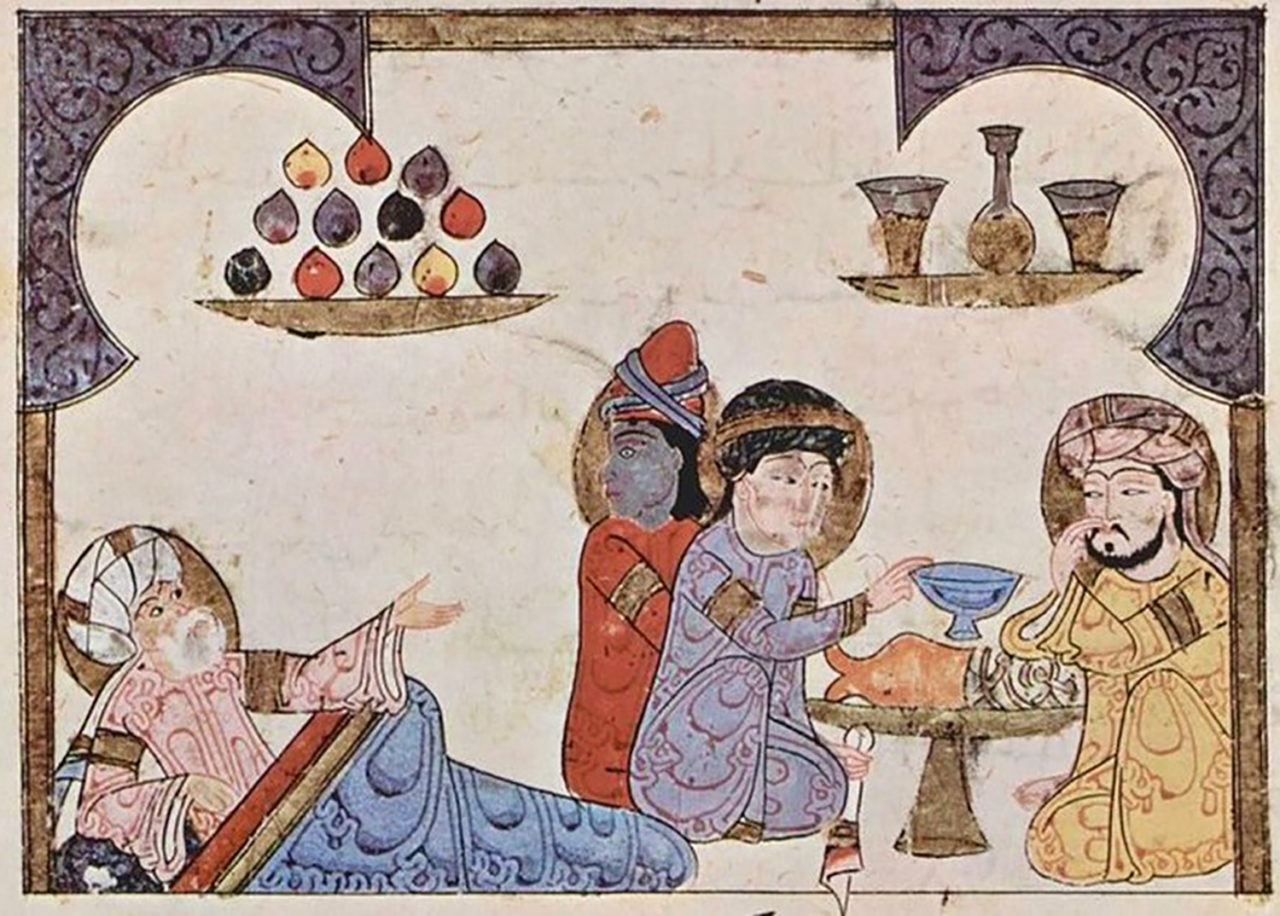 Ibn Butlan depicting himself alongside a physician from Mayyafariqin on the bottom right in his manuscript titled “Call to Physicians”.

The “Ten-Eyed” or “Ten Arches” Bridge.

After Nasr al-Dawla’s death in 1061, he was succeeded by his son Nizam al-Dawla Nasr (1061-1079) as head of the Marwanid Emirate. Nizam al-Dawla Nasr too prioritized public construction work as had Marwanid rulers before him. New towers were added to the Amid city walls in 1067, 1072 and 1073. The Tigris/Dicle Bridge now known as the “Ten-Eyed” or “Ten Arches” Bridge (On Gözlü Köprü) was also built over the river Tigris during his reign in 1065, under the supervision of his vizier Ibn al-Anbari.

Inscription containing the name of the architect and construction date of the Ten-Eyed or Ten Arches Bridge.

Bastion tower no. 67 in the city walls is also known as the New Gate (Yenikapı) Marwanid Tower. (DITAV archive)

Miniature depicting Marwanid soldiers laying siege to the city of Urfa (al-Ruha/Edessa) held by the Byzantines in 1032.

Nizam al-Dawla Nasr continued his father Nasr al-Dawla’s policy of alliance with the Great Seljuk Empire. As a result of this cooperation, Marwanids fought in the Battle of Manzikert alongside the Seljuqs. First, negotiations were carried out between Seljuq Sultan Alp Arslan, whose forced were encamped on the plains of al-Rahwa (Rahva plateau) near Bedlis (Bitlis), and Byzantine Emperor Romanus IV Diogenes. When these proved fruitless, the two armies clashed on the 26th of August 1071. As recorded by period chronicler Hilal al-Sabi, the Marwanids were stationed on the plain with an army of ten thousand by the side of Alp Arslan, who had four thousand soldiers with him. The Battle of Manzikert thus ended in the victory of the Seljuqs and, by extension, of the accompanying Marwanid army. Yet, when returning home, Alp Arslan chose to appoint his own governors to Akhlat and Manzikert, thus removing them from Marwanid administration.

Floral kufic inscription mounted on the Single Tower (Tek Burç) built into the city walls in 1083 by last ruler of the Marwanid dynasty Nasir al-Dawla Mansur.

Hard times awaited Nasr al-Dawla Mansur (1079-1085) who ascended the throne after his father Nizam in 1079. The Seljuq Empire was bearing down on the Marwanids in all manners possible, as the prosperity of their lands had come to attention. A while later, Seljuq Sultan Malik Shah sent the army that would end the Marwanids. Malik Shah then handed the lands belonging to the collapsing emirate to Artuq Beg. Historian Ibn al-Azraq writes that peace and prosperity in the region declined with the collapse of the Marwanids. Despite being a chronicler of the Artuqid period, it is seen that he chose to give the former Marwanid administration its honest due.

NEXT SECTION
MAPS: FROM AMIDA TO CARAMIT
GO BACK TO THE BEGINNING