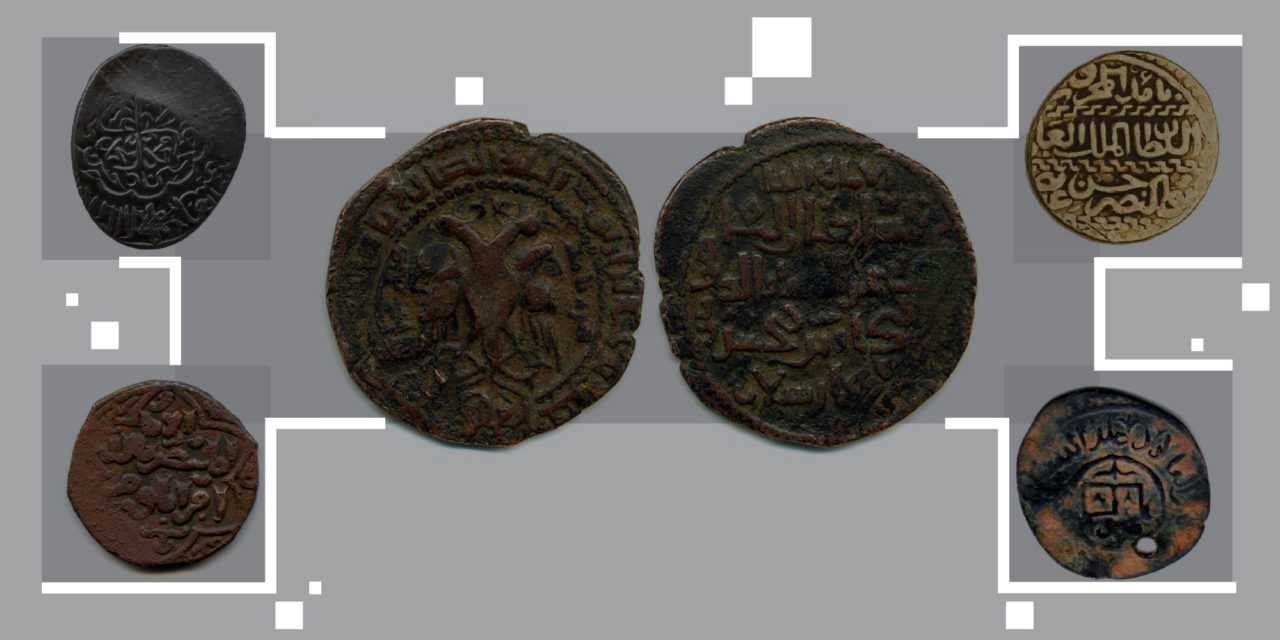 A planchet or “blank” ready to be struck as a coin is placed between two dies, and the upper die is then struck with a hammer. With every strike, the image and inscriptions on the dies are impressed a little more upon the blank. Metal, hence transformed, becomes a brand new entity, takes on new meaning once out of the mould.

In every epoch throughout history coins have signified more than the sum total of the materials from which they were made and their production processes, instead becoming symbols of independence and power. Issuing coins in their name upon taking the throne has always been considered a crucial display of sovereignty for rulers.

No coinage was struck in the early years of Islam, and Muslims used the existing Eastern Roman and Sassanid (Sasanian) monetary systems. In later centuries, having coins minted/issued and a khutba (Friday sermon) delivered in one’s name became an important source of legitimacy in Islamic states as well.

Gold coins minted were called “dinar”, silver coins “dirham” (also known as “drachma”), and copper coins “fals”. The issuing of gold coins was usually considered the most important indicator of the legitimacy of a ruler’s reign. Almost all great dynasties to have ruled in the region, from the times it was called Amid to today’s Diyarbakır, have had their own gold coins issued.

The minting of coins here for nearly a thousand years without interruption is but one indication that Diyarbakır has retained its importance throughout the ages. The issuance of gold coins by great dynasties demonstrates the city’s political weight, but also provides significant present-day proof as to the dynamism of its economic life.

The gold coins minted in Amid in 905 in the name of Abbasid Caliph al-Muktafi carry the name and epithets of the reigning caliph in the center of the obverse side. Their inner margin bears an inscription of the place and date of minting, while the second row of text in the outer margin features Quranic verse.

The gold coins minted in the city of Amid in the name of Abbasid Caliph al-Muktafi carry the name and epithets of the reigning caliph in the center of the obverse side. Their inner margin bears an inscription of the place and date of minting, while the second row of text in the outer margin features Quranic verse.

Early on, the Islamic coinage tradition did not involve any images/iconography. Instead, coins bore the names, titles, epithets of rulers and religious formulae such as verses from prayers and the Kalima Tauheed. This may be explained by the religious prohibition against images. Yet the Artuqids, Zengids (Zangids) and Ayyubids departed from this tradition, using figural images on coins. Al-Malik al-Salih Mahmud became the first Artuqid ruler to mint coins in the city of Amid. He is also the first ruler to employ on coins the double-headed eagle/black-eagle motif also carved on the city walls of Diyarbakır.

Upon his death in 1222, Artuqid ruler al-Malik al-Salih Mahmud was succeeded by his son al-Malik al-Mas’ud Maudud. When it came to issuing coins in his own name a year later, he too opted for the double-headed eagle figure like his father before him.

The city of Amid was taken from the Artuqids by Ayyubid Sultan al-Malik al-Kamil Muhammad in 1232, and al-Malik as-Salih became its new ruler. Though under the Ayyubids, the right of mint was generally considered the sole prerogative of the dynasty’s reigning sultan, under certain conditions maliks were also able to issue coins.

In 1240, Sultan Ghiyas al-Din Kaykhusraw II of the Seljuqs of Rûm conquered Amid and minted coins in his own name.

Silver coin issued by Sultan Giyaseddin (or “Ghiyas al-Din) Kaykhusraw II of the Seljuqs of Rûm in Amid.

The Seljuqs of Rûm weakened and came under Mongol suzerainty as vassals in the 13th and 14th centuries, creating a power vacuum in Anatolia. Turkoman dynasties such as the Artuqids of Mardin and the Aq Qoyunlu (White Sheep), who gained control of the Diyarbakır region during and after this period, issued coins in their own names.

The earliest coins minted by the White Sheep Turkomans in Amid carry the seal of the Bayındır tribe. Hamza Bey is recorded as the member of this dynasty to have minted the first coin in Amid.

Cihangir Mirza succeeded Hamza Bey in leading the Aq Qoyunlu. He too did not fail to issue coins in his own name in Amid.

Copper coin issued by Aq Qoyunlu Cihangir in Amid.

Though the confederation’s capital was moved to Tabriz under the rule of Uzun (“Tall”) Hassan Bey, Amid remained an important political center. In fact, upon his ascension, Uzun Hassan had gold coins minted in Amid as well.

The Aq Qoyunlu continued their territorial expansion under Sultan Yaqub. We do not encounter the seal of the Bayındır tribe on coins minted in Amid in this period. Yet these coins display artistically more sophisticated form.

Silver coin issued by Aq Qoyunlu Sultan Yaqub in Amid in 1474.

Silver coin minted in the name of Safavid ruler Shah Ismail in Amid.

After the Aq Qoyunlu Confederation, Diyarbakır came under the rule of the Safavids, for whom Shi’ism was state religion. It is possible to trace the cultural effects of this transition as much as the political. Hence, coins minted in Amid in the name of Shah Ismail, founder of the Safavid dynasty, carry the slogan “Ali wali Allah” along with the Kalima Tauheed on their obverse center and the names of the Twelve Imams on their margins. Their reverse field, on the other hand, bears the name and title of the Shah as well as the place and date of the coin’s minting.

In the days of Selim I (Yavuz Sultan Selim), one gold coin was worth sixty silver ones. At this time, the manufacture of coins took place in a total of almost twenty mints. “Ashrafi” became another name for Ottoman gold from this period onwards.

Gold coin minted in the name of Sultan Selim I the Grim (Yavuz Sultan Selim) in Amid circa 1513.

Amid held an important place among mints producing gold coins during the time of Sultan Suleiman the Magnificent. Silver and copper coins were also struck at the Amid mint alongside gold. A prominent characteristic of the copper coin issued in Amid in 1520 in the name of Sultan Suleiman the Magnificent was that it involved a recasting of the double-headed eagle figure used in the Artuqid era.

Gold and silver coins kept being minted under Mehmed III as well. The presence of the Ottoman tughra (the Sultan’s signature) draws attention in the silver ones.

There were times in the Ottoman era too when Amid was occasionally called Kara (Black) Amid, a name derived from the black basalt stone used in its city walls. This was also reflected in the mint name inscribed in coins issued here. Thus, in a silver coin issued during the reign of Ahmed I, the mint name appears as Kara Amid.

NEXT SECTION
MAPS: FROM AMIDA TO CARAMIT
GO BACK TO THE BEGINNING